It supports quite a lot of features:

DVB-S2 is a newer specification of the DVB-S standard with better performance and intended for professional users too. Due to its flexibility it has become the preferred way for transmission of HDTV content.

DVB-S2 was developed by the DVB (Digital Video Broadcasting) Project in 2003. It benefits from better error correction algorithms (BCH and LDPC) combined with a variety of modulatios (QPSK, 8PSK, 16APSK and 32APSK) and a powerful stream handling. Backward compatible modes are available which allow using existing DVB-S devices as well as broadcasting additional content for DVB-S2 capable devices during transition periods.

Four modulation modes can be selected for transmission. While QPSK and 8PSK are typically used for broadcast services, there are modes for professional applications too. 16APSK and 32APSK allow higher bandwidth but require higher signal quality. They are normally used in unicast environments where the receiver can feed back to the uplink station. In this case the uplink station can choose the best transmission method.

For broadcasters there are several reasons to use those new features of DVB-S2:

A key factor is also the backward compatiblility: There is a large population of DVB-S receivers used in the world which must continue to service customers for several years without the need to purchase new device - especially if there is a receiver subsidy or if public services are broadcasted. So established broadcasters can't switch abruptly to DVB-S2 only.

In this case the backward compatiblility feature of DVB-S2 is very important: During the migration process it allows DVB-S devices to continue operating while it provides additional services to advanced receivers. At the end of the transition process, when most of the receivers are capable of DVB-S2, they can switch to the non-backward compatible mode and exploit the full potential of DVB-S2. 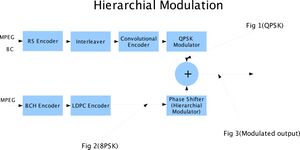 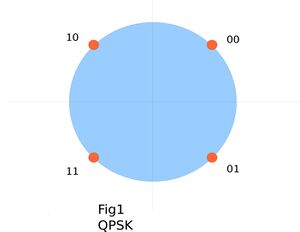 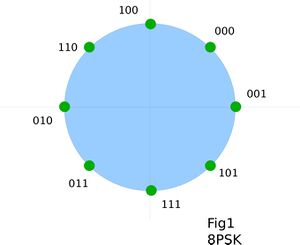 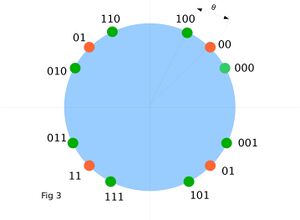 The DVB-S2 system may also deliver broadcasting services over multiple Transport Streams, providing differentiated error protection per multiplex (VCM). A typical application is broadcasting of a highly protected multiplex for SDTV, and of a less protected multiplex for HDTV. Assuming we transmit a symbol rate of 27.5 Mbaud and use 8PSK 3/4 and QPSK 2/3 modulation, 40 Mbit/s could be available for two HDTV programmes and 12 Mbit/s for two to three SDTV programmes, with a difference in C/N requirements of around 5 dB.

DVB-S.2 is compatible with moving pictures experts group (MPEG-2 and MPEG-4) coded TV services, with a Transport Stream packet multiplex. Multiplex flexibility allows the use of the transmission capacity for a variety of TV service configurations, including sound and data services. All service components are time division multiplexed (TDM) on a single digital carrier.

DVB-S2 does not specify symbol rate range, however implementations by different vendors are planned to cover the range from 100 ksymbol/s to 60 Msymbol/s, resulting in maximum transmission rates as high as 300 Mbit/s.

ISI: Input Stream Identifier, second byte of the BBHEADER field when for multiple input streams. It provides a way to separate different BBFRAMEs within a single multiplex, defining logical channels for BBFRAMEs.

Frame synchronization is needed to indicate the start of each FEC block for the decoder. It also provides the necessary information for the receiver to apply the appropriate demodulator and decoder to demodulate and decode the transmitted information. Given that some overhead is necessary for frame synchronization, it is also designed such that it can be used to reduce initial frequency and phase uncertainty of the modulated signal. The frame synchronization is designed to provide reliable operation in the worst case Signal to Noise ratio with minimum overhead. It is also used to minimize the demodulator implementation loss in the presence of consumer quality low-noise-block (LNB) phase noise. In fact, phase noise is particularly detrimental to demodulator performance for higher-order modulation such as 8PSK, 16APSK, and 32APSK. To preserve the near Shannon limit performance of the DVB-S2 FEC, pilot symbols may be added to assist the demodulator to minimize probability of cycle-slips and to provide more accurate phase estimates. These pilot symbols are also designed to use a minimum overhead of the overall bandwidth, and can be turned on or off as desired. The frame synchronization structure and the pilot structure are described in this annex. The frame and carrier synchronization algorithms that make use of this framing structure are described in annex C.

Each LDPC coded block is preceded by the Start of Frame (SOF) and the Physical Layer Signalling (PLS) code (PLSCODE). SOF is a known 26-symbol pattern. PLSCODE is a 64-bit linear binary code, which conveys 7 bits of information with a minimum distance 32, i.e. a [64, 7, 32] code. In total, SOF and PLSCODE occupy one slot (90 symbols).

7. The new standard applications will support dynamic adaptation of channel coding and modulation if technically feasible and commercially viable.