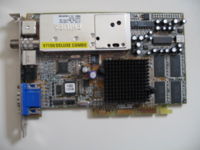 The RivaTV project aims to provide driver support for nVidia GPU based graphics cards that feature the inclusion of an onboard video capture chip, and, hence, have video-in facilities. By leveraging and providing an interface to V4L drivers, the RivaTV drivers also aim to support the tuner and audio features found on the, so called, "Personal Cinema" type of cards; nVidia based video and tuner combo cards, essentially equivalent to ATI's All-in-Wonder cards.

A list of cards supported by RivaTV is available here and here ... with the latter link likely the more inclusive source of the two.

The bottom line is that RivaTV is in dire need of some modernization. However, other than some periodic commits to its CVS that re-establish/provide the ability to compile the RivaTV drivers on recent kernels, the project currently does not appear to have any sort of continued development -- a fact that is most unfortunate for owners of Nvidia based graphics cards sporting video in capabilities.