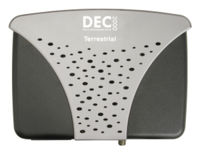 A DVB-T USB 1.1 device manufactured by TechnoTrend and resold by Hauppauge.

It is supported under Linux.

The DEC2000-T is a digital receiver set-top box that it is equipped with an USB port, allowing it to be used either as a PC peripheral or as a standalone STB (i.e. used without a PC).

There is space for a CAM in the version of the hardware supplied with the 1.26 firmware, however, locating a CAM for Top-up TV in the UK is a different story altogether, despite Hauppauge providing them for other models.

The device's TV-Out can't be used for PC output.

The device can only deliver a partial/modified TS stream to userspace: due to the limited bus bandwidth provided by USB 1.1, of approximately 12Mbps, only selected PIDs can be transferred over USB to the host system. Consequently, some high bandwidth transponders won't work, and HDTV reception is not possible.

One can watch digital TV with this device using xine, or alternatively record the incoming stream via cat'ting /dev/dvb. It will not work with VDR as a primary device because it does not have a hardware MPEG-2 decoder.

However, it can be used in VDR as a soft-device, streaming or xine or as secondary device.

If you have the kernel sources installed, or have installed the dvb-apps, use the following command:

Copy the dvb-ttusb-dec-2000t.fw file downloaded by the above step into the /lib/firmware directory.

The device's internal components are hidden behind the USB interface.

The following drivers are needed for this device: