Difference between revisions of "Hauppauge WinTV-HD" 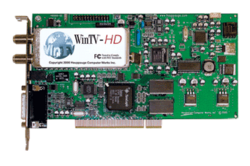 An ATSC PCI card by Hauppauge featuring MPEG2 hardware decoding. It is not supported under Linux.

This card, also known as model 00698, was Hauppauge's second ATSC device and was brought to market in very late 2000.

The main feature of interest is its use of the Janus MPEG2 decoder. See the MyHD Linux Driver project for more detail.