Difference between revisions of "Twinhan VP-1020" 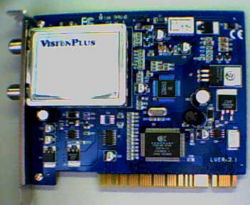 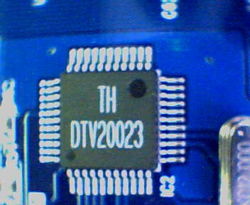 A (so called) "Budget" DVB-S PCI card by TwinHan. This card is well suppported by the LinuxTV drivers.

The oldest card in the DVB-S family from TwinHan !

Required modules and parameters: This card uses the bttv driver.

Loading just dvb-bt8xx will normally autodetect the card and load all the above modules with the required parameters. See the following section for one potential problem area.

This card derives it's PCI subsystem ID from the value contained in the EEPROM. Unfortunately, for some reason (or cheapness on TwinHan's part) the EEPROM is not write protected, and, consequently, due to unknown reasons (maybe a buggy driver or something?) portions of it may become corrupted/overwritten.

So, if your kernel freezes at startup with the following last messages:

it most likely means that your card's EEPROM has become corrupted. The fefe:0001 value reported is an unknown ID, which causes the bttv driver to hang. The good news, however, is that with the EEPROM being writable, this also means that one can fix the problem relatively easy.

Steps for fixing a corrupted EEPROM:

Note: To fix the EEPROM, it is IMPORTANT that you load all modules for your 1020 card except dvb-bt8xx.

1. Obtain the i2c* utilities
You will need the i2c* programs from lm-sensors -- some Linux distros may have these utilities already installed, otherwise you will have to obtain and install them yourself.

2. Determine your card's i2c Bus
List all the installed i2c buses on your system by opening a command terminal and running:

From the i2cdetect output, determine which bus relates to your 1020 card -- the first column in the list will show i2c-BUS, where BUS is an integer representing a particular installed bus in your system. From here on, whenever BUS is written in these instructions, substitute it with the correct integer that represents the bus that you just determined is for your card.

3. Obtain a contents dump from your card's EEPROM

Note: This can be dangerous if the BUS used is wrong, but usually it is safe.

The next step is to run:

The above should list available address spaces detected on that BUS. The 1020 card normally has only one active chip at address 0x50. If your output seems right, then try to dump the EEPROM's contents with:

From the output of the EEPROM contests dump, you will find that the (incorrect) subsystem ID will reside in the last 4 bytes -- make sure it matches the one that your system prints just before the system hang (i.e. if your system message shows the incorrect fefe:0001, that means the last 4 bytes from the EEPROM dump should be 00 01 fe fe ). If you do not see the incorrect ID there, or nothing resides at address 0x50, stop here and heed this warning!

Note: The following commands will write to the EEPROM chip. This means that:

Now, with that said, a 1020 card exhibiting the hanging symptoms described above, but whose EEPROM dump doesn't have the expected incorrect ID at 0x50, is still essentially a very small step away from becoming a doorstop, so you might as well go ahead anyway and perform the following steps which write to the card.

The commands will complain about failing readback, but it should work anyway.

5. Check for success
Cross-check that you successfully overwrote the EEPROM with the correct ID by way of another EEPROM contents dump:

If all looks correct, then once the bttv module is loaded again (e.g. at the next reboot, or via unloading the modules from memory and then reloading them), it should now detect your card correctly. The same goes for the dvb-bt8xx module.