An USB controller, that also contains an embedded DVB-T demodulator, produced by Tai-Hui and marketed under the brand name e3C Technologies.

This IC is used in many cheap DVB-T USB Sticks. Support is currently very experimental under Linux. (Only the combination with MXL5003S will work and only with 7 and 8 MHz channels.)

Note: The list of devices here is quite a mess. Mostly because cheap EC168 devices are sold under a bazillion different pseudo brands and generic names. That makes it hard to trace the original manufacturer. So if you know any better please correct the manufacturer/oem information on this page.

And please, if your device or its PCB differ from the ones that are here, please take some pictures and add them.

If you own one of these devices, please add the missing information and make a subsection for them, or add them to the appropriate device subsection.

The firmware file EC168BDA.bin is contained in the Windows driver directory.

Apparently produced by SinoVideo and sold under lots of different names.

As the windows driver CD is labeled SV3420A and timestamps are rather old, I suspect that the drivers didn't change since SV3420A. Equally the Linux driver should work for all revisions. Remote control part is recognized as HID device by the kernel.

Works with the driver from Antti's mercurial repository as described in [7] with Ubuntu 9.04 (linux 2.6.18-24). Firmware on the original CD didn't seem to work, but the firmware on palosaari.fi does work.

Note that under Windows, the red light on the usb stick lights up, under linux it stays dim all the time (but watching TV with mplayer is just fine)

Cheap offer at Hofer (Aldi) in Austria. Has an EC168 and MXL5003s built in, which refers to the E3C reference design. Reffering to the link, the system only freezes after loading the dvb-usb-ec168.ko module under debian 5.0 unstable. All other modules load fine. Maybe other distros and/or hardware has better success. It's even impossible to load the firmware via dfu-ec168 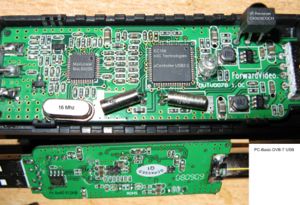 Same USB descriptors as SinoVideo 3420A-2, but with another PID... IR is detected directly by the hidraw driver (usbhid)

The windows driver also upload the 7109-bytes sized firmware (EC168BDA.bin) to get the device working...

Uploading Firmware to the device

Something interresting with this device : We can patch USB ID and descriptors included in the firmware and/or device memory... 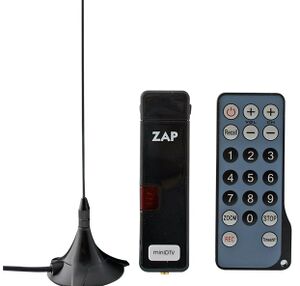 Sold by TeknikMagasinet in Sweden since at least 2008, still sold 2013. There exists at least two versions of the hardware, with the same name and similar functionality and design. The product is sold with at least two sw bundles too (that may be related to the hw), older versions were sold with DVBViewer Windows software, newer with Blaze.

(The PCB has the same main components, but is more heavily populated with resistors, etc. Picture is pending.)

Sold in mid 2009, together with DVB Viewer. The firmware is the same as in the Microtune MT2061F version. The device requires the firmware in the repository to work, not the bundled bin file.