Difference between revisions of "Geniatech T230" 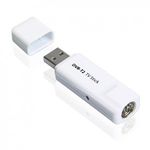 All the mentioned devices can be used with the PadTV and PadTV HD app on Android. The T230C and T210v2 must be connected via a USB OTG adapter. PadTV HD supports H.265, but the phone must be fast enough. On Windows, 28 Jun 2017 drivers (shipped with some T230C devices in 2018, but working for pretty much any recent Geniatech device) are required to prevent frequent blue screens in nearly all apps.