What do we need in userspace, only for v4l (dvb is not concerned):

The ideal solution would be to create a v4l2 library provided to applications. They would access the v4l2 drivers via this library that would manage decompression if needed. If this library existed from the v4l project start, applications would have linked to it forcibly. The v4l project has a long history and it is more and more difficult to break compatibility now and force applications to link to a new library.

I thought it would be funny to create userspace drivers like FUSE based projects do. Applications would see nothing but a new device driver to access, all decompression algorithm would be in userspace. The path from the application to the v4l2 kernel driver: [Application]<->[/dev/video1 (created by FUSE-like driver)]<->[/dev/video0 (created by kernel v4l2 driver)] For applications, this changes nothing... For v4l drivers for hardware that can fullfill all application requested formats, this changes... nothing too. This architecture is interesting for v4l drivers that interface hardware that provide proprietary compressed video pictures or that are not able to fullfill the application needs by hardware.

A general overview of the thing: 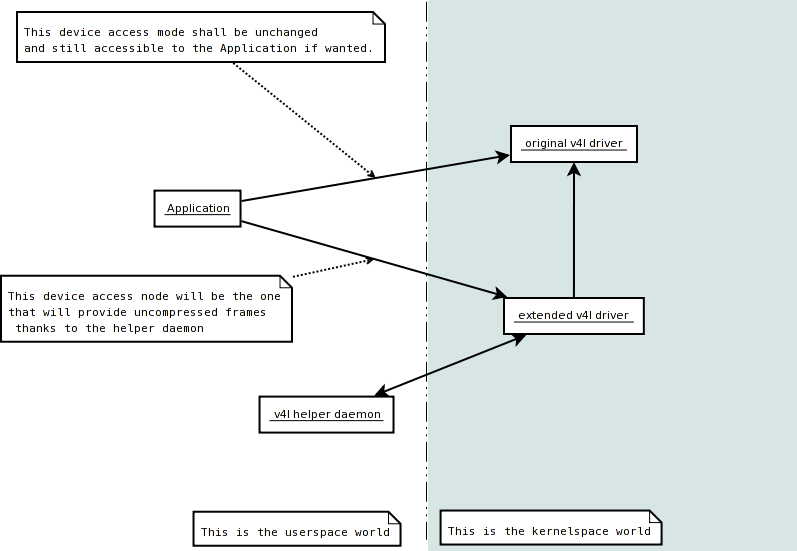 General use case view of the extended v4l driver: 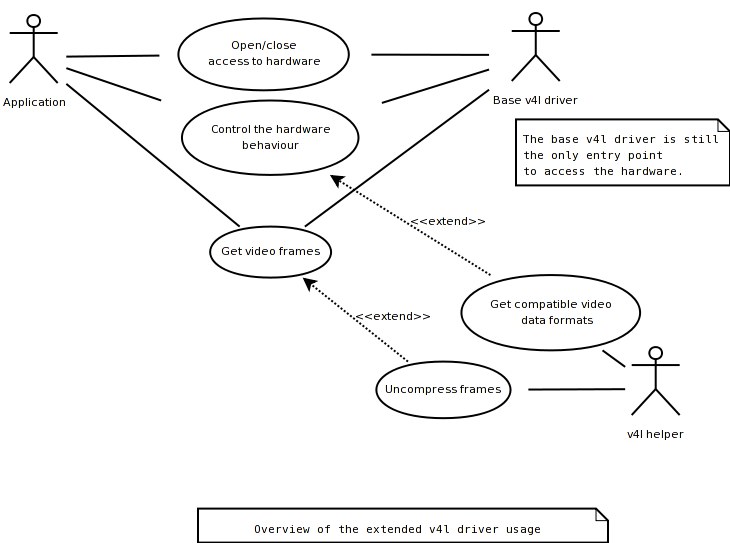 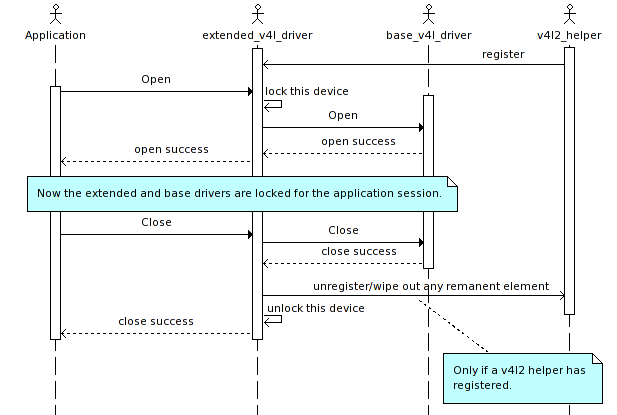 The application needs to get frames from the v4l peripheral, this task is fulfilled by the extended v4l driver with the help of the base v4l driver. Pre-conditions

The extended driver is opened properly on /dev/video1.

For all these previous steps, the extended video driver transmits the request to the base driver without interaction. 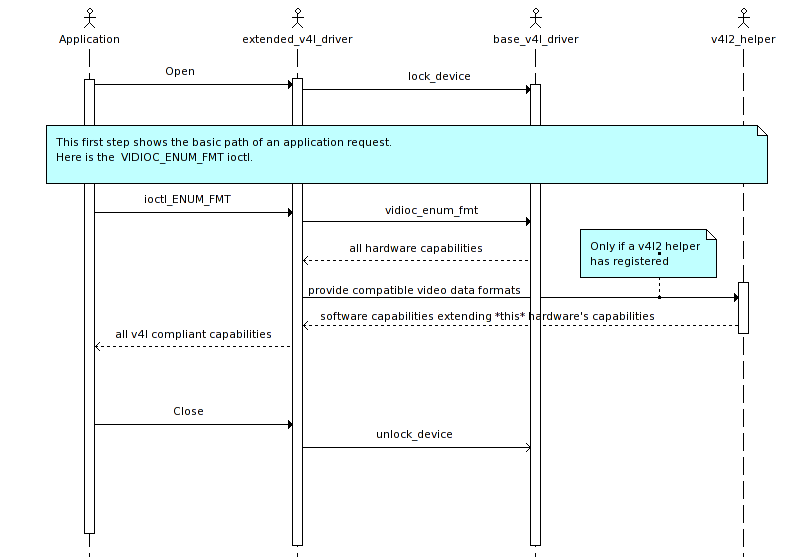 A1 - the v4l helper daemon is not running (the /dev/v4lctl driver is not opened by the helper daemon) the extended v4l driver transmits the request to the base driver without interaction...

As the driver is correctly configured, the hardware captures and streams data from the device. This step will show how to managed the incoming data and provide them to the Application. This is the most important part to understand from this specification.

The extended v4l driver is properly configured on /dev/video1.

Otherwise the extended v4l driver transmits the request to the base driver without interaction. 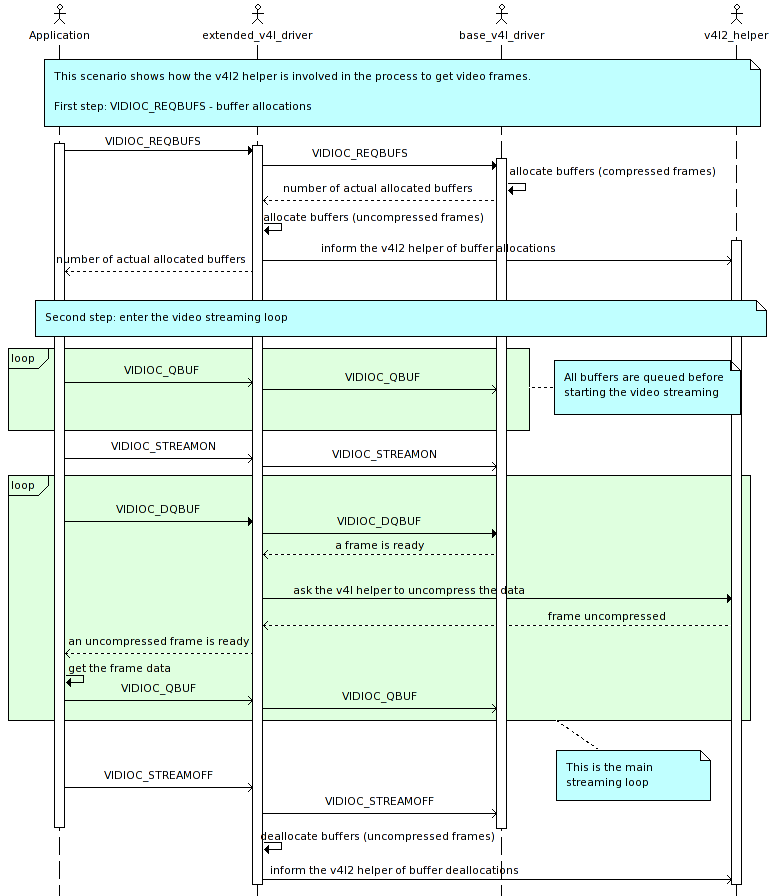 The v4l helper daemon has been registered

This part concerns the interactions with the userland v4l helper in order to uncompress frames.

In order to precise the context of a frame decompression, here is a collaboration overview of all components involved. 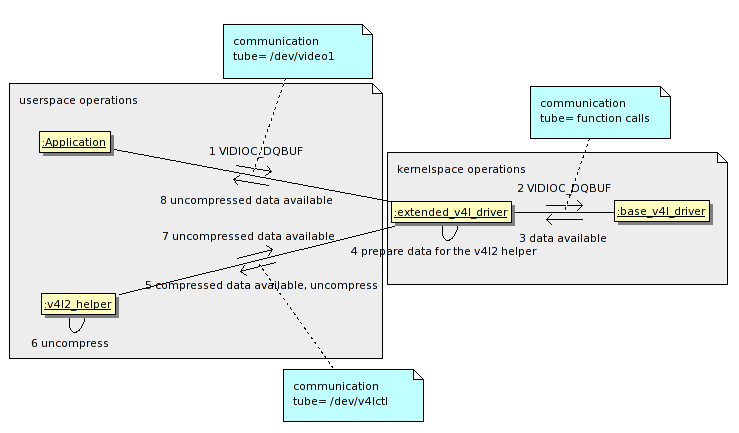