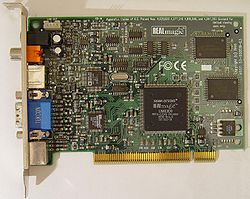 Shown is a REALmagic Hollywood Plus version

Back in the stone ages of computing (i.e. circa 1999/2000 timeframe) days of yesteryear when DVD playback was actually still difficult for the typical home computer system, several vendors released MPEG2 decoding cards. One such series of clones were those PCI cards based upon the Sigma Designs EM8300 decoder IC. A compressed MPEG2 stream read from a DVD would be sent to the PCI card, which would then perform the video decoding and then send the resultant stream: